In Greek mythology (and the Harry Potter books), there is a creature called a Phoenix. There are many legends surrounding the miracles and powers of this bird but the most commonly associated legend is how it’s life is cyclical. It never ends. When the Phoenix is ready to die, it bursts into flames. Once it has dissolved into ashes, it is reborn out of the ashes, beginning it’s life again. While that’s a neat story, it’s certainly not what we as normal, mortal human beings can ever expect in reality. But wouldn’t it be awesome? Would it be great to have a redo button sometimes. Life isn’t going your way? Just start it over!

It’s easy to get caught up in what is going wrong. Not just when something major happens but also in every day life. We find ourselves naturally drawn to dwelling on the negative rather than the positive. That’s simply us being human. We are broken, sinful beings. We have to fight our natural urge to pass judgment, to criticize, to be negative. Some are better at fighting it than others but we all have that same base sinful urge. That is why it is so important that we fight against it. Early into my separation, I find myself completely caught up in the negativity. That’s perfectly normal and even reasonable. My life as I saw it was falling apart. However, I believe that something being normal or reasonable doesn’t necessarily make it acceptable.

We are called to be like Christ. We are called to model our lives after him. As we approach Good Friday and Easter, I’m inclined to dwell on the significance of His sacrifice. As Christ was verbally, emotionally, mentally, and physically assaulted, it would be deemed perfectly normal and reasonable for Him to say “Forget it. I don’t have to take this. You guys are on your own.” It would be reasonable because He didn’t have to take it and we DO deserve to be on our own. But it wasn’t acceptable. Not to Christ. He knew that focusing on Himself and the negative aspect of what He was going to endure couldn’t even come close to outweighing the positive.

Sometimes it’s hard for me to say that Christ dying on the cross was positive but it undoubtedly was. The image of the cross is deeply personal to me. I have two tattoos of crosses and a ring with a cross on it that I wear every day. This is strictly for my own edification. I look at the cross every day and think about the crucifixion. Not in a morbid or sad perspective, but with a mentality of love and mercy. I have life because of what the cross symbolizes. Much like the Phoenix, we have been given life out of death. And for that, I will choose to be positive in my circumstances. I will choose life. I will choose to keep my eyes on the cross. 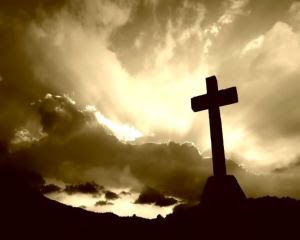